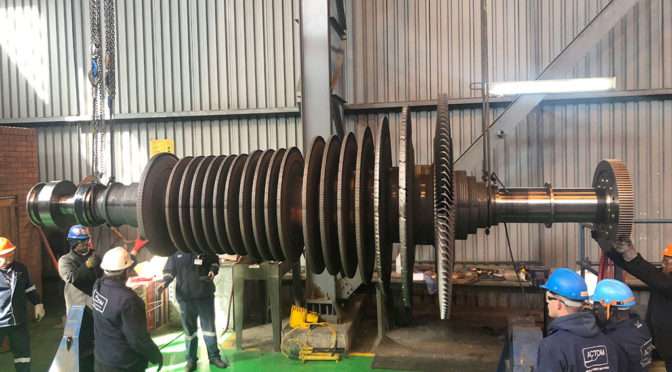 According to Mike Chamberlain, Marthinusen & Coutts’ marketing executive, this achievement showcased the capacity of the divisions to take full control of large mechanical and electrical refurbishments. Chamberlain highlights that the customer did not want to split the responsibility for the complete generator and turbine drive train between separate contractors.

The scope included a complete inspection of the turbine rotor and internal components, as well as runout and dimensional inspection on the rotor. Inspections incorporated glass bead blasting and non-destructive testing of many components.

High-speed balancing of the 13 tonne rotor was conducted, and turbine rotor journals were repaired. White metal bearings were relined, and the thrust bearing was modified to improve fitment in the bearing casing. Positive material identification tests were conducted on all the studs, nuts and shaft seals. A complete 3D scan was done of the centreline to allow reverse engineering drawings.

At is repair facility in Cleveland, Johannesburg, Marthinusen & Coutts also performed a number of inspections, tests and repairs on the rotor. Dimensional inspections and electrical tests were conducted, as well as non-destructive testing such as the phase array test. Slip rings were ground, the diode wheel was inspected, and the diodes were tested.

“The excellent working relationship we had with Metalloys’ technical staff, and the cooperation we got from them certainly contributed to completing the work as quickly as we did,” says De Jager. Starting the inspections, tests and repairs in July, the team completed the overhaul by mid-August. 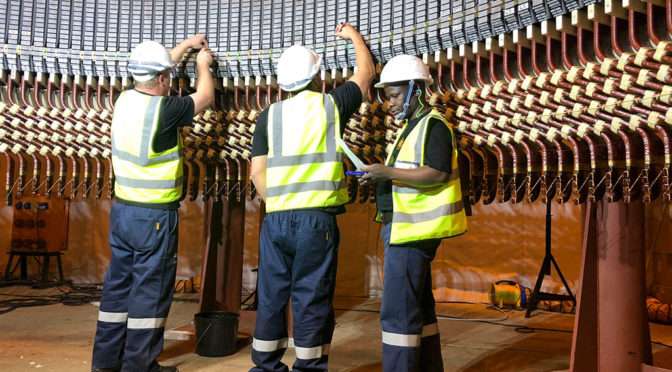 In what has been described as the largest winding installation ever conducted in South Africa, Marthinusen & Coutts, a division of ACTOM (Pty) Ltd, has completed a major repair at Eskom’s Ingula pumped storage hydro-electric plant.

The contract involved the complete rewind of a 373 MVA stator for one of Ingula’s four 14-pole motor generators. According to Richard Botton, managing director of Marthinusen & Coutts, the 342 MW unit is among the biggest in South Africa with a core diameter measuring 5 metres, a core length of 3,2 metres and a rotor mass of 500 tonnes.

“As the stator was located deep in the turbine floor, all the winding was required to be conducted on site,” says Botton. “In this complicated repair, each replacement coil set was fitted, connected and brazed on-site from pre-manufactured and pre-packed components supplied by the OEM. The most painstaking process, conducted to the highest standards, was the resistive brazing on 1,824 joints.”

Marthinusen & Coutts carried out the work with a 14-man team, completing the work in November 2018 after 100 days on site. Their extensive preparation included the establishment of training jigs at its Johannesburg facility, allowing customised training for all technicians involved in the mammoth project.

“We also conducted detailed testing, and refurbishment where necessary, of all the winding equipment we would use on site,” he says. “This contributed to smooth and uninterrupted operations, making us self-sufficient in rolling out the contract.”

Working closely with OEMs and Eskom, Marthinusen & Coutts took full ownership of the rewind project from start to finish, he notes. The contract was successfully completed on-time with all test criteria well within specification.

“With our in-country expertise, supported by our Centres of Excellence in Benoni and Cleveland, the project showed the world class capability of Marthinusen & Coutts,” says Botton. “We could also contribute our specialised equipment and supply chain – elements that often present a challenge to foreign service providers trying to conduct this kind of project work in South Africa.”