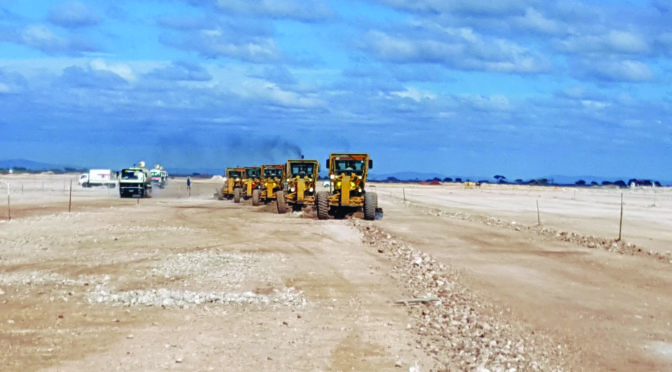 Despite the downturn in both the civil engineering sector and mining in recent years, Raubex Infra’s civils and mining division has been active in several projects across South Africa’s provinces.

Bringing its usual combination of technical expertise and innovation, the division has been attending to contracts from sinkholes to roadworks, according to Cornel Strydom, operations director for the Raubex Infra’s civils and mining division.

A five-month job to repair a sinkhole on the road between Danielskuil and Kuruman required the use of dynamic compaction with a falling weight.

“This kind of work requires close adherence to the design of the geotechnical engineer, with constant and regular measurements being taken to ensure that the correct results are being obtained,” says Strydom. “Underground conditions cannot be defined in detail in advance, so special care and monitoring is vital.”

In this case, the sinkhole had many chambers, some which had to be filled with rock. By compacting the rock in columns, a rock platform was created over the columns to form a ‘bridge’ between the cavities. The layer works for the road could then be placed on this platform.

The company was also recently required to stabilise the gravel road between Douglas and Campbell, and offered a solution that saved on future maintenance.

“In collaboration with the client, we decided on stabilising the wearing course of this gravel road down to a depth of 150 mm by using a dust suppressant,” he says.

The benefit of stabilising the current material in this way is that the dust suppression qualities of the surface remain as the material wears away. This effectively reduces the normal intervals between future spraying of dust suppressant as the road wears.

In a smaller road project, at a private game reserve in Limpopo Province, both paved and concrete roads have been constructed and cables laid for internet connectivity.

On the mining side, Raubex Infra conducted mass earthworks for a new run-of-mine tip structure and internal roads for a mine in the Western Cape, making use of a pugmill blending plant for mixing moisture into the gravel for road construction.

“Some of the areas where material had to be placed were very confined, so it was not possible to mix water into the soil conventionally,” he says.

Projects in the pipeline include a road rehabilitation and reseal contract between Vanzylsrus and Hotazel, a storm water pond at Lufhereng in Soweto, a water treatment project in Bloemfontein, a water pipeline project at Vanwyksvlei and a borehole contract at Carnarvon.