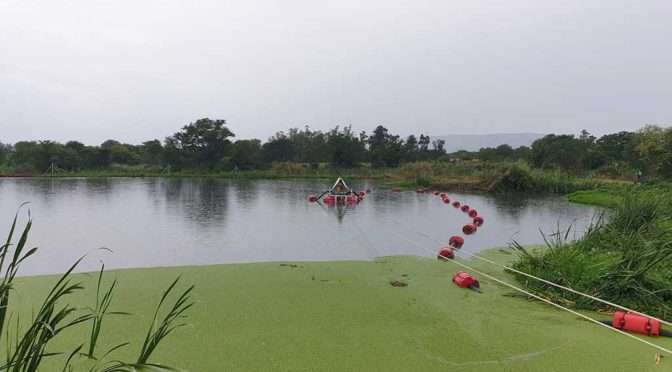 The recent upgrading of sewerage facilities at an Eswatini sugar producer required more than the dredging of a sewage pond – but Integrated Pump Rentals was up to the demanding task.

Cleaning of a settlement pond usually involves the pumping of high solids material to another nearby dam. In this case, however, there were no containment areas for the sewage on the customer’s site. According to Ruaan Venter, rental development manager at Integrated Pump Rental, an innovative solution had to be found to capture and store the sewage.

“The pond in question was close to the company’s sugar cane fields, so absolutely no spillage was permitted onto those lands during our cleaning process,” says Venter.

At the heart of the cleaning operation was Integrated Pump Rentals’ well-proven SlurrySucker mobile dredging unit. On this project, the SlurrySucker Mini was employed, emptying the pond of 30 to 40% solids material at 150 m3 per hour.

“To contain the sewage, we procured specialised geotextile bags measuring 30 m long by 18 m in circumference,” he says. “These were laid out on a large area near the dam, which had been allocated for this purpose.”

Before the sewage could be pumped into the bags, however, it required the addition of flocculant to facilitate the separation of solids and liquid. This was achieved using an in-line dosing system, feeding the flocculant into the pipeline from a 1000 litre tank. Effective mixing in the pipeline could be reached over a 100 m distance of the pipeline.

“After two weeks, we had filled three of these large bags with the material from the pond,” Venter says.

As the water separated from the solid material, it was able to drain through the bags’ porous sides and flow back into the pond. The solids could then be left to dry out in the geotextile bags, after which it could be moved from the site and discarded safely.