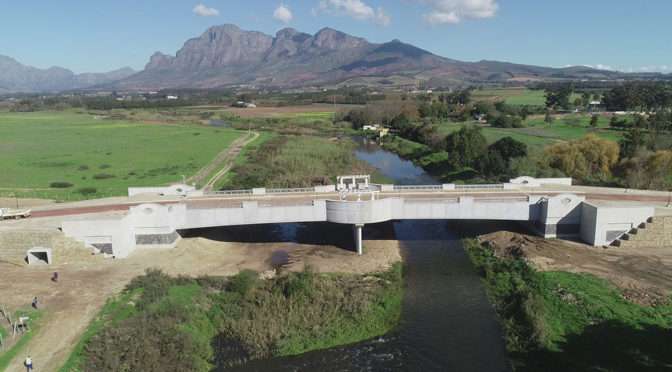 A range of CHRYSO products contributed to the success of a bridge project near the historic city of Paarl in South Africa, involving the largest precast beams cast to date in the Western Cape.

Weighing 64 t each, the 18 prestressed beams for the Val de Vie Berg River bridge project measured over 35 m long and two metres high. The large volume and tight spacing of the reinforcing steel, coupled with the presence of stressing cables, meant conventional concrete would not suffice and  the local CHRYSO Southern Africa team worked in conjunction with the precast contractor to design, test and submit a self-compacting concrete mix .

CHRYSO’s CHRYSO® Premia 310 superplasticiser and CHRYSO® Dem Bio 10 environmentally-friendly release agent formed part of the solution for the successful casting of these beams, and were also used in the project’s large facing panels, coping and culverts.

Once all the beam strands were evenly stressed, readymix concrete was placed and a combination of external and poker vibration was used for compaction. This provided a good surface finish with minimal blow holes. After pouring, a tarpaulin was placed over the mould and steam was injected under the cover to accelerate hydration. Using this method, a strength of 40 MPa was achieved in 20 hours, enabling the production of one beam a day. The final strength required was 60 MPa, and this was achieved within 28 days.

Before the casting process, CHRYSO® Retarder paste was applied at the end of each beam shutter and the concrete washed off with water the following day after the shutter was removed. This created a rough exposed aggregate finish that provided a good bonding surface for the assembly of the bridge.

The facing panels were also steam-cured, and were cast with a glass-smooth finish. They were attached using ‘fingers’, eliminating the use of visual fixing on the front face. Some panels were curved, such as those used for cladding the central viewing cove.